The History of Kaßberg Prison

In the last quarter of the 19th century, the Kingdom of Saxony had a new justice complex built on the eastern edge of Chemnitz’s middle-class neighborhood Kaßberg, which included a prison and the representative buildings of the public prosecutor’s office and the district and local courts.
The prison, which has a cruciform floor plan, has a central middle building, the dome, which connects the administrative wing with the three cell wings (wings A, B and C) built in the gallery-style.

The National Socialist Period 1933-1945
From 1933 to 1945, the remand and penal prison, which was expanded by a fourth cell wing (D-wing, construction began in 1938), served the National Socialists for countless people’s imprisonment – similar to the prisons in Hoheneck (Stollberg) and Bautzen. In addition to „common criminals“, the 184 cells of the prison mainly held political prisoners of the judiciary as well as Communists, Social Democrats, Jehovah’s Witnesses and other persons excluded from the „national community“, including homosexuals and those stigmatized as „asocial“ (beggars, alleged „work refusers“ and prostitutes). In 1936, the prison was renamed „Chemnitz Remand Prison“ (Untersuchungsgefängnis Chemnitz). For many victims of the National Socialist tyranny, the Kaßberg prison was one of the first stations on a long path of suffering that led more than a few of them to the „hell of the concentration camps“.
The Kaßberg prison played a significant role in the disenfranchisement and persecution of Chemnitz’s Jews. In November 1938, the Gestapo held 14 Jewish men here for several weeks under inhumane conditions, whom they had taken into protective custody on Reich Pogrom Night along with 172 other victims who were deported to Buchenwald concentration camp shortly after that.

The NKVD Prison 1945-1952
After the end of the Second World War in Germany in May 1945, the Soviet secret service NKVD (People’s Commissariat for Internal Affairs) and the Soviet Ministry for State Security (MGB) took over the Kaßberg prison. Nazi criminals, including members of Chemnitz’s Police Battalion 304, which was actively involved in the Holocaust in Eastern Europe between 1940 and 1944, were imprisoned in the Kaßberg prison. Besides them, the prisoners on remand included people who, on the one hand, opposed the newly emerging communist system out of liberal political conviction and, on the other hand, those who innocently became victims of denunciation and political arbitrariness. Numerous young people were arbitrarily suspected of having been members of the Nazi partisan organization „Werewolf“. Also, people from the mining company SAG Wismut were sent to the Kaßberg prison. They were accused of espionage and sabotage. In summary trials contrary to the rule of law, a Soviet Military Tribunal (SMT), which was sitting near the Kaßberg prison, sentenced many prisoners to draconian prison sentences (20-25 years) or even death. From Kaßberg, the prisoners were sent to one of the Soviet special camps (including Bautzen and Mühlberg on the Elbe) or the Butyrka prison in Moscow to execute the death sentence.

After being handed over to the GDR authorities in 1952, the prison building served as a detention center for both the Ministry of the Interior (D-Wing) and the GDR’s secret police. In the A, B and C wings, the Ministry of State Security (MfS) imprisoned thousands of political persecutees, including, for example, people who were critical of SED rule or had attempted to cross the GDR’s borders. The MfS object administration „Wismut“ (OV W), which was responsible for secret police protection of Soviet uranium mining in the nearby Wismut area, set up its investigation department in the Kaßberg prison – following on from the corresponding use of Kaßberg Prison during the NKVD period. In 1989, this part of the prison used by the MfS had 163 cells in which 329 prisoners could be accommodated. Thus, it was possible to detain about one-fifth of all MfS remand prisoners at Kaßberg.

The German-German Prisoner Release 1963-1989
As the largest of a total of 17 pretrial detention facilities run by the East German secret police, the prison in Karl-Marx-Stadt (Chemnitz) had a special function since the mid-1960s: It became the central hub of the German-German prisoner release program. Between 1963 and 1989, the government of the Federal Republic of Germany obtained the release of more than 33,000 political prisoners from prisons in the GDR. In return, the „Workers‘ and Farmers‘ State“ received deliveries of goods worth around three billion Deutschmarks. The MfS had nearly 90 percent of all prisoners selected for this „exchange deal“ transferred from various penal institutions to the B Block of the Kaßberg prison. The MfS employees called the B-Block „Nourishment institution“ and prisoners used the term „birdcage“ because the GDR negotiator and lawyer in charge was Wolfgang Vogel („Vogel“ is German for „bird“). After a stay of several weeks in the B wing, collective transports took the prisoners via the Wartha/Herleshausen inner-German border crossing to the Gießen emergency reception camp. After a long odyssey, life in freedom began.

The Period After 1990
After the collapse of the SED dictatorship, the Free State of Saxony took over the prison facility. After modernization measures, Saxony’s government operated the prison facility as a correctional facility until 2010. When the first plans for the sale of the property were made, there was a broad political discussion about the future handling of the historically significant prison building. Accompanied by great media interest, committed citizens founded the Kaßberg Prison Learning and Memorial Association (Lern- und Gedenkort Kaßberg-Gefängnis e. V.) in November 2011. With the support of the Saxon Memorials Foundation (Stiftung Sächsische Gedenkstätten), this association is committed to commemorating all those who suffered the greatest injustice on Kaßberg under the National Socialist rulers and during the years of the communist dictatorship in a dignified manner at the historically authentic site. Each period stands for itself. From the beginning, it was the goal of the association to establish and operate a memorial site in a part of the former prison building.

Association and Contemporary Witness Work
The Kaßberg Prison Learning and Memorial Association (Lern- und Gedenkort Kaßberg-Gefängnis e. V.) has set itself up to inform people about the injustices committed under National Socialism, the Soviet occupation zone and the GDR. We want to remember the fates of those who were politically persecuted. Since 2011, the members and the board of association have been involved in guided tours and events voluntarily. The association frequently organizes events and eyewitness talks in and outside Chemnitz. Our contemporary witnesses and our historians regularly led groups of visitors through the former Kaßberg prison until the start of construction work in winter 2018. In 2017 and 2018, there were about 130 guided group tours of the former prison grounds each year. Those tours provided information about the history of the detention building, gave information about the work of the association and contemporary witnesses spoke about their own experiences as political prisoners. The association cooperates with other initiatives of affected persons and groups, which carry out educational work with events and provide assistance for affected persons and their relatives. For several years, the association has participated in the „Chemnitz Museum Night“. The 2017 and 2018 museum nights each attracted more than 1,000 visitors. A varied program awaited them: In the prison’s courtyard, the association presented eyewitness interviews and historical pictures of the jail on screens. In guided tours through the former prison building, contemporary witnesses gave an insight into the conditions of imprisonment as political prisoners in the Soviet occupation zone and the GDR. Visitors were also able to learn about the significance of Kaßberg Prison during the National Socialist tyranny. In another part of the building, affected persons‘ initiatives and other associations provided information about the darkest chapters in the history of the SED dictatorship.

The Creation of the Memorial Site
Since its founding in 2011, the Kaßberg Prison Learning and Memorial Association (Lern- und Gedenkort Kaßberg-Gefängnis e. V.) has been committed to establishing a place of learning and remembering on the grounds of the former MfS investigative detention center Kaßberg in Chemnitz, the central hub for all prisoners released from GDR prisons.
In the past two years, the project has experienced a very dynamic and successful development. The outstanding voluntary commitment of the contemporary witnesses, the voluntary board members, and the association members significantly contributed. The association has also been working with the Berlin project development and exhibition office beier+wellach projekte since February 2018. The memorial site will be built with approximately 1800 square meters of floor space in the cell wing, where the political prisoners destined for release were housed. Between 1962 and 1989, the government of the Federal Republic of Germany released more than 33,000 political prisoners from GDR prisons. Nearly 90 percent of them reached the Federal Republic and thus freedom via Kaßberg Prison in the Karl-Marx-Stadt district. The permanent exhibition will focus on this process, which is unique in Germany and Europe.

Nevertheless, we will also examine the other periods in the history of the Kaßberg prison. In the confrontation, the pretrial detention of the Ministry for State Security (MfS) is essential. Also, the period of use by the Soviet secret service NKVD in the immediate post-war period and the history of the prison under National Socialism are significantly important. The exhibition uses historical mediation to commemorate political persecution and the victims of the double dictatorship. Therefore, biographies of the former prisoners are the focus of each era. This learning site for democracy invites the free exchange of opinions and promotes democracy. It points out what society loses when the rule of law is lost. In the second half of 2022, the learning center for democracy at Kaßberg in Chemnitz will permanently open its doors to visitors. 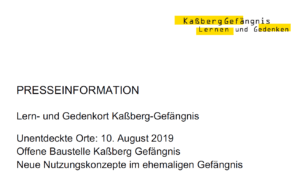